The circle is nearly complete for David Wright 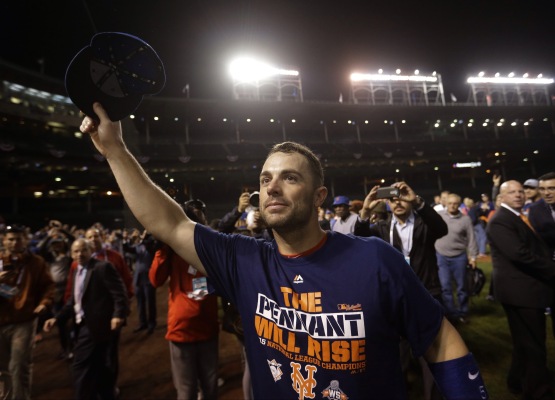 David Wright  faced the greatest trial of his life in 2015 after being diagnosed with spinal stenosis in the first month of the season.

Not only was he faced with his own basebLl mortality, he also wondered how the quality of his normal life might be as he dealt with a back injury that often caused so much pain, he couldn’t even stand and talk with reporters without leaning over the back of a chair.

But instead of pouting, instead of feeling sorry for himself and giving up, Wright chose the longer view of his condition, looked at this season as the greatest opportunity in his career and went to work.

Wright rehabbed day after day 3000 miles away from home in Los Angeles as he spent what seemed like an endless spring and summer in physical therapy with Dr. Robert Watkins and his group of specialized trainers in an effort to strengthen his core, reduce the pain and get him back to his profession.

It took a long time. There were good days, there were bad days. The bad days often left Wright with more questions than answers.

But as he watched his team struggle but persevere through the season, his determination never wavered.

He showed up at Citi Field in early August ready to learn if the three months he spent rehabbing from a startling condition would pay off for him in the form of baseball activities. He passed every test set by the team, which only led to more tests as he began a mini-camp of sorts inclusive of live batting practice and regular drilling to get his body back into game shape.

He passed those tests too. A rehab assignment was next.

And after no setbacks after a strict program with Single-A St. Lucie, Wright rejoined the Mets for a series against the Phillies in Philadelphia, and in one swing of the bat, Wright was back.

He hit a long home run to left field in his first plate appearance in what was one of many magical moments for the Mets in 2015. He was back, and more determined than ever as he understood how special this rend ion of the Mets were.

He had been through so much, and so much beyond this new condition he would have to deal with for the rest of his life.

He had endured one failure after the next with the Mets. He had been battered and beaten by the baseball lords and was asked to stand up and represent the organization when nobody else could or would answer to those failures.

He waited and hoped that somehow, all of it would pay off for him.

And then to be given the greatest personal challenge of his life with no guarantee he could play again was an even deeper blow for someone who had waited nearly a decade to flirt again with a championship.

Faith and patience have pretty much defined Wright’s career to date. Perhaps that experienced served as his guiding light.

Even when he returned it was far from easy. He endured up to a two hour routine just to get his body into a state he could begin preparing for a baseball game every single day. Then he would go through his batting practice, fielding drills and other normal preparation steps ahead of the game. He would play, then afterwards have his back wrapped in a soaking cold ice wrap, and call it a day.

Like any other player, Wright had his good days and his bad days. His good days were often highlighted by fist pumps and his patented smile.

His bad days? Hardly noticeable because of his good days.

But all of that hard work, those uncertain days and the questions about what’s next for the Mets captain were stamped and sealed when he capped the Mets division title with a three-run home run against the Reds on that glorious Sarurday in September.

The circle was complete. After all of that, Wright and the Mets were back and this time, ready to exorcise the demons of Adam Wainwright’s curveball.

Wright was far from great in the postseason. He had two big moments – he delivered a huge two-run single in Game 1 of the Division Series against the Dodgers, and a long home run against the Royals in Game 3 of the World Series, found himself on-base often via the walk, had some great plays and some not so great plays in the field.

It ended with a loss against a team that simply outplayed Wright and the Mets. But it did not end with any shame.

“It’s disappointing that you get this close and you can kind of see that championship right there,” Wright said on Tuesday, according to Newsday. “We just fell a little short. I don’t think it’s anything to hang our head about . . . I don’t think anybody has had time yet to reflect, but when we look back on this, I think everybody is going to be proud, which we should be. It’s going to put a smile on our face.”
Wright is very proud of the steps the team took in 2015.

“For me, again, some of the best times I’m ever going to have on a baseball field,” he said. “So I’ll look back on this with a smile on my face and be very proud of what we were able to accomplish.”

There is uncertainty with some of his teammates heading into this short off-season. But the core will remain intact and should improve ahead of what he hopes is another championship run in 2016.

“I think that anytime you can come back with kind of that same core, same coaches, same manager proves that you are not only going in the right direction but you have some success to build on,” he said.

No matter what happens, it was an unforgettable experience for Wright in 2015. It was the best of times and most certainly the worst of times, but he knows now he and the Mets are finally close.

“What a ride!” He told MLB.com on Tuesday.

Indeed, it was quite a ride.