Or, perhaps more likely, the Royals simply exploited the Mets greatest and widely discussed weakness in 2015.

The World Series could be defined simply by a myriad of missed opportunities for the 2015 New York Mets, as they watched their season take a one-way trip to oblivion aboard the runaway train known as the 2015 Kansas City Royals.

The missed opportunities began right off the bat in this World Series for the Mets. Literally.

The first pitch Matt Harvey threw on Tuesday set the stage and the tone for a series in which the Mets always seemed to be playing one step behind the Royals.

Harvey threw a mid-90s fastball down the middle to open the bottom of the first inning in Game 1 last Tuesday, a pitch Alcides Escobar shot into the gap in left-center field. But the ball was indeed playable, as both Michael Conforto and Yoenis Cespedes approached the spot near the wall to catch the ball.

But the ball wasn’t caught. 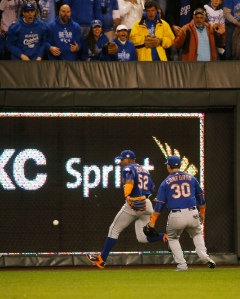 Conforto thought Cespedes called for it, Cespedes thought Conforto called for it. Cespedes could only make a last ditched effort to catch the ball, but in his attempt he kicked the ball seemingly a million miles away from anyone, which allowed Escobar to easily circle the bases for an inside-the-park home run.

It’s hard to believe a World Series could be defined by the first play and the first pitch of the series, but it was, and the Mets always seemed to be one step behind from there.

Their defense would betray them again a few hours later in the 14th inning when David Wright botched a routine groundball with a wide throw to first, costing the Mets an out, a base, and ultimately a run in an utterly deflating Game 1 loss.

A few days later, Daniel Murphy’s defense would betray the club in an attempt to rush a groundball to try and get a double play in the ninth inning of Game 4 with the Mets leading.

It happened again 24 hours later with Eric Hosmer at third as the tying run in the ninth inning. His aggressive and gutsy base running at third base on a groundball to the left side forced a rushed throw from Lucas Duda to the plate. The ball sailed wide, and the lead was gone.

The Mets defense certainly cost the Mets two games in this World Series. It arguably cost them three.

But the common thread with at least two of these mistakes is the Royals put the pressure on the Mets defense to execute and come up with a big play thanks to their speed and aggressiveness, forcing them to play up to them and their game.

Each and every time, the Mets failed to make those big plays, and failed when it really counted.

“The game speeds up and they are certainly very dangerous. You’ve got to be cautious of them,” manager Terry Collins said after Sunday’s loss.

Overall, the Mets committed six errors in five games during the World Series. They committed a total of nine errors in 14 games in the postseason.

Certainly, the Mets were sloppy and loose with the baseball, something they were not in their victories against both the Dodgers and Cubs earlier in the playoffs. And while it can be safely argued the Mets certainly beat themselves with their array of both physical and mental mistakes, it can also be argued that the Royals forced the issue on their defense, essentially making the Mets play up to them.

When that happens, whether it’s in baseball, football or hockey or any sport for that matter, the team in the Mets shoes in this World Series is forced to do things they simply are not capable of doing.

The two key plays involving Murphy and Duda in Game 4 and 5 of this series were indicative of just that.

In the case of Murphy, he was trying to prevent the tying run from scoring by attempting a double play. He charged, rushed and tried to counter the Royals speed.

And because of that, he overran the ball, never got a single out, and the floodgates opened.

On Sunday, it was Hosmer’s aggressiveness against the entire Met infield. In this case, the Mets did everything right. David Wright fielded the groundball, he checked Hosmer at third, and threw to first. But Hosmer did something nobody does in that situation with the infield in, and he broke for home, surprising everyone in the ballpark in the process. That forced the rushed throw from Duda, who threw wide of the plate.

Hosmer was safe, and it only seemed like a matter of time from there.

Then there are the little things, such as all of the stolen bases against the Mets pitching staff and Travis d’artaud’s arm to setup run scoring opportunities – such as Jarrod Dyson’s in the 12th inning and countless others throughout the series. It eliminates double play chances for the Mets, and puts pressure on the outfield to catch and throw the ball.

And seemingly each time, the Mets could not answer the Royals.

“We didn’t make the plays we needed to make,” Terry Collins said.

Remarkably, the Mets led in 18 of the final 21 innings of the World Series. They lost two of those three games.

Jeurys Familia suffered three blown saves in the World Series. In two of them, he did not allow a hit.

Simply put, the Mets did not catch or throw the ball when it mattered most.

But that might be too simple. In the end, the Mets defense could not play up to the Royals when it mattered most.

The Royals were faster, they were more athletic, and they came up with the plays most every time the Mets couldn’t to create their opportunities. All of these areas were known flaws with the Mets – all of those flaws were exploited.

That’s why the Royals managed to win the last game of the season.