Terry Collins credits the Dodgers for his chance, looking forward to his new playoff challenge

On Friday night, Terry Collins will manage his first playoff game after spending 40 years in the game as a player, manager and a variety of different roles for several organizations.

Collins reminisced about his time as a player in the Dodger organization in the early 1980s as his playing career was coming to an end, and the Dodgers offered him a job to manage inside their organization, who brings an 838-850 lifetime record as a manger into the 2015 Division Series.

“I’m sitting in this chair because of the Los Angeles Dodgers and Bill Schweppe who was our Minor League Director when I was a player here,” Collins explained on Thursday in Los Angeles. “For some unknown reason, he liked me. He should have released me a dozen times and he kept me around, gave me my first job in managing the Minor Leagues.

Collins said he learned so much from the Dodgers, which set the foundation for the second part of his career in the game.

“I learned baseball. I learned Dodger baseball,” Collins said. “At a time when you can walk out on the field in Spring Training and you had Drysdale, and Koufax, and Maury Wills, and Wes Parker, and Roy Campanella was talking after dinner at night. You talk about learning baseball and learning the history of the game, I spent a little time in that training camp. So I learned everything here.”

But since Collins is finally managing in his first postseason, the experience will undoubtedly be different with the stakes at it’s highest. 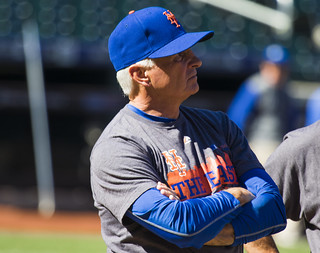 Collins said he soaked in the achievement of managing his first playoff team after the team clinched in Cincinnati.

“I was lucky enough to have my sister in town. My wife was there,” the Mets manager explained. “And that dinner that night was the first time I just said … it’s all been worth it, all the bus rides, all the years, all the time on the field. So the other day in Cincinnati, I said the same thing.”

But now that the regular season is over, Collins and the rest of his staff are focused on the challenge at hand, which is defeating the Dodgers in the Division Series.

“The last couple days, it’s been getting ready for tomorrow” he explained. “As you know, there’s a lot going into getting ready for a game in our world today instead of just showing up and playing. So it’s been pretty much getting ourselves ready to go out tomorrow night, making sure that everything’s is good.

“Everybody’s done what we think we need to do,” Collins said.

As for the point the team turned the corner in 2015, Collins credits the acquisition of Juan Uribe and Kelly Johnson as the moment not only the roster began to transform, but that those moves provided a message for the rest of the clubhouse and that the front office believed this team had a legitimate chance to win right now.

“That was the trade that set things where we started to go,” Collins explained. “When Sandy made the deal, he came in and he and I talked. I took the same message that he and I talked about out to the players and said ‘hey, look, we’ve got a good team. You hit, you play.’

“Lucas Duda took off, Flores took off, Kelly Johnson and [Juan Lagares] kept playing as well,” he continued. “The two professional at-bats in that lineup and in that clubhouse, all of a sudden guys are looking at their jobs saying, oh my gosh, I’ve got to step up here and they did. To me, that is when we started turning things around.”

Collins is looking forward to seeing Jacob deGrom thrive on the big stage in game one.

“Jake deGrom has as much confidence in his own ability as anybody I’ve ever known,” Collins said. “I just said earlier this guy had to work harder than other people to get to the Big Leagues. He not only got here, he had very, very good success here. He believes he can get anybody out.

“I think he trusts his stuff which is another thing, because we’ve all seen him when he’s had a bad outing, he just seems to get better as the outing goes because he’s not afraid to continue to throw strikes and I think it makes a difference.”

As he’s been able to maintain all throughout the season, Collins credits the positive attitude inside his clubhouse as a key to the club’s success to get them into the playoffs.

Said Collins, “We’ve gone through as every team does, some ups and downs, some big high points and some real low points. Yet still try to maintain this positive attitude in the clubhouse. I think tomorrow is something that a lot of these guys have been looking forward to, be it veterans or young guys, but we are very, very lucky. We have some of the best veteran leadership of any team I’ve ever been around. They’re going to keep these guys focused.”