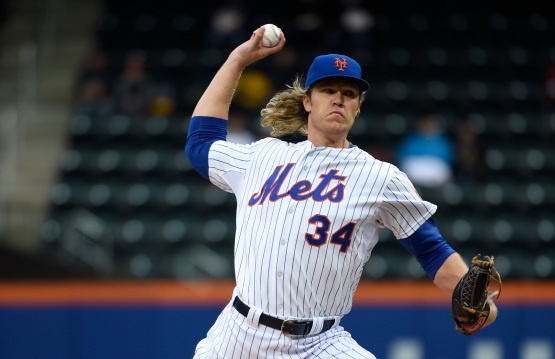 If the end of his season was any indication, Noah Syndergaard could have something very special in store when the bell rings on his postseason next weekend.

Syndergaard was scintillating for seven innings early Saturday, allowing just two hits in seven innings with a walk and ten strikeouts, allowing only a solo home run to Clint Robinson in the top of the seventh inning.

It was the capper to a magnificent rookie season in which Syndergaard, went 9-7 with a 3.24 ERA in 24 starts after being recalled from Triple-A Las Vegas on May 12.

Unfortunately, due to a lack of any kind of offense, Syndergaard’s effort ended with a no-decision.

“I felt like I ended the season on a high note today. And I felt like I learned a lot this season,” Snydergaard said after game on of Saturday’s doubleheader. “Now it’s time to transfer what I learned during the season into the playoffs.”

He has ended his season on a high note over the last 3 1/2 weeks, ever since the Mets strategically skipped his scheduled start against the Marlins during Labor Day weekend. Saturday marked the second time in four starts he allowed two hits in an outing of seven innings. He’s also the first Met to record consecutive double-digit strikeout outings since Jacob deGrom did so from September 15-21, 2014.

“Today, every time I fell behind in the count, I was able to locate either a changeup or a curveball for a strike and induce some groundball outs,” Syndergaard explained.

Syndergaard was pitching backwards in a lot of sequences against the Nationals. In fact he recorded multiple strikeouts looking with fastballs on the corners thanks to his ability to throw his change-up and curveball for strikes earlier in those counts.

“I wasn’t necessarily throwing fastballs in fastball counts. So it’s something that gives me a lot of confidence,” he said.

Not only does he continues to throw strikes consistently, but since his hiatus in early September, Syndergaard’s electricity has not only returned, but he seems to have refined his approach as well.

During his struggles in August, he often got one-pitch happy. He’d throw his fastball too often to hitters and struggle, or he’s get too curveball-happy, go to the well once too often and hang one to give up a big hit.

That is not the case anymore. This is now a formidable right-hander who’s intelligent, intimidating, and crafty.

He’s an evolved pitcher and continues to evolve with each outing he has.

“When I came up here I was more of a thrower,” the right-hander explained. “Now I think I’ve advanced myself to more of a pitcher. I’m excited at the strides I’ve made this season.”

Syndergaard credits Dan Warthen for his evolved state from a thrower into a formidable major league pitcher.

“Working with [Dan Warthen] has been an absolute joy. We’ve fine-tuned my mechanics to where there’s really no pressure on my arm. The strength and condition staff has done a tremendous job of keeping me on the field.”

With his gem on Saturday, Syndergaard became the 14th pitcher in the last century to record five double-digit-strikeout performances among his first 24 career games. Dwight Gooden (10 such games) and Matt Harvey (also five) are the other Mets to pull off the feat.

“This guy throws a lot more strikes and you would think a young man with that kind of arm and that size, it’s surprising how much he pounds the strike zone,” manager Terry Collins said. “That’s why I was most impressed as we went through the season. He throws strikes and he makes you swing the bat, and that is why I think he’s going to be a good pitcher.”

Syndergaard had a 5.35:1 strikeout-to-walk-ratio in 2015, his rookie season. His strikeouts-per-nine and WHIP all lead major league rookies this season.

Now, Syndergaard’s focus will turn to the playoffs and pitching against the Dodgers. He is slated to start game two of the Division Series.

And he’s confident about his team’s chances despite their recent struggles.

“I think we’re going to give it to the Dodgers anywhere we are,” Syndergaard said confidently.