The Mets have beaten the lesser teams, which is ‘how a lot of teams win pennants’

Terry Collins recognizes the significance of those six wins as they are currently five games ahead of the Nationals for the lead in the National League East with 40 games to go.

Their magic number to clinch the National League East is down to 36.

“This is how a lot of teams win pennants. They beat teams you’re supposed to beat,” Terry Collins said after Saturday night’s win. “You come in here, and they play very good in their park. They’re tough to play here.”

Collins is right. As dominant as the Mets have been against the Rockies, they’re games they simply have to cleanup with and rack up wins.

The Mets are faced with some uncertainty on Sunday with Logan Verrett starting in place of Matt Harvey, who is being skipped in an effort to manage his innings and workload down the stretch.

The club believes this is the only time they’ll have to skip Harvey, thanks to the six-man rotation they intend to implement when Steven Matz is activated from the disabled list.

“Hopefully, Logan can give us five or six, and we’ll see where we’re at,” Collins said. “But this is a good stretch. It’s a stretch you’ve got to make hay, because we’re going to run into the Yankees, we’re going to run into the Nationals. We’ve got our work cut out for us. That’s why we’re taking each one we can get, because you don’t know what’s going to take place tomorrow.”

Of course, nobody expects any team to sweep a season series against any team, and the Mets will be looking to do something they’ve never done at Coors Field on Sunday, which is sweep a series in that ballpark. Still, that doesn’t mean it’s not an opportunity to tick the magic number down, which would make it awfully disappointing when they don’t win these games.

It’s partly why the 7-1 lead the Mets blew on July 30 against the Padres after the seventh inning was among the terrible losses of the year, as they were facing a sub-.500 lead in their own ballpark, and lost that series as a result. 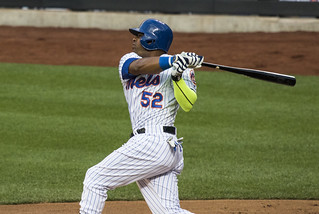 The team has vastly improved over the last month, thanks mostly to the new additions in Kelly Johnson, Juan Uribe, Tyler Clippard, and Yoenis Cespedes. They’ve helped to create frontline depth at the big league level and has allowed Collins to play the matchups with more force, as he did on Saturday night against LHP Chris Rusin.

They’ve also clearly helped them win games thanks to their ability to lengthen the lineup, increase their depth, and produce themselves.

Since July 24 – the day they acquired Johnson and Uribe – the Mets are 17-9 and averaging 5.6 runs scored per game.

“With the additions we’ve made, guys in the lineup have now relaxed,” Collins explained. “There’s not so much pressure on … those young guys to have to produce, because you’ve got guys in the middle of the lineup that have done it for their careers.

But what’s also important about the additions is they’re all battle tested in pennant races and in the playoffs as well.

They’re going to be depended upon to come through a lot in those big situations, if the Mets intend to win that pennant in October.