With Wright and Goeddel on their way back, who is at risk of being roster casualties?

David Wright remains on track to be activated from the disabled list on Monday when the Mets play the Phillies in Philadelphia.

In addition, Terry Collins recently said Erik Goeddel is, “close” to being activated as well.

On Wednesday, Collins said while Wright will be the primary third baseman, he will not be there everyday until his back is 100 percent healthy.

“He won’t be that everyday guy until we know his back is 100 percent and that might not be until next spring,” the manager explained. “So we’ll have to keep an eye on it.”

Wright will likely pair with Juan Uribe as the main duo at third base, with Uribe serving as a primary weapon off the bench from the right side. That means Daniel Murphy will serve as the primary second baseman, with both Wilmer Flores and Ruben Tejada splitting time at shortstop, as they have done most recently. Collins will also have to find playing time for Kelly Johnson, who could play in the outfield against right-handed pitching.

Of course, the Mets could always wait 12 more days until rosters expand to activate Goeddel, but they would still need to clear a 40-man roster spot at that time anyway. 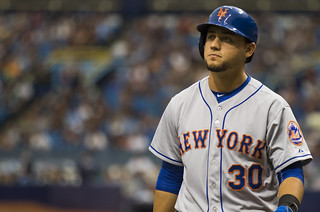 This is unfortunately the only real solution to accommodating Wright next week, but it wouldn’t be because of performance.

All things considered, Conforto has been excellent in his first round in the majors, showing off that sweet, left-handed swing with power and an ability to drive in runs. He’s gotten a little pull-happy and teams are employing shifts against him as a result, but eventually this is going to be a special hitter with an ability to drive the ball to all fields.

He has played mostly against right-handed pitching, with Michael Cuddyer getting the bulk of the at-bats against left-handed pitching recently. It’s something Terry Collins didn’t initially plan to do, but he made him into a platoon player virtually immediately thanks to the abundance of options which fell into his lap seemingly moments after Conforto was called up.

His demotion would likely be temporary, barring anything unforeseen. He should be back a week later when rosters expand. That has it’s benefits too, because the Mets will not have to keep him down 20 days and spend his first player option.

This will solve an active roster spot, but of course Conforto will be retained on the 40-man roster.

This is potentially a safe route they can take. They can always send him down to Las Vegas and bring him back when rosters expand. But, he can miss bats when he’s right, and he’s been right more often than not lately.

In his last 18 2/3 innings, Robles has allowed five runs and ten hits with six walks and 21 strikeouts.

Robles misses bats, and that’s something which is rare in the Mets bullpen right now. Since he doesn’t clear a 40-man roster spot anyway, it’s probably not the most efficient route to take, since they have to clear someone else in addition to Robles.

Outright one of the extra catchers off the 40-man roster. 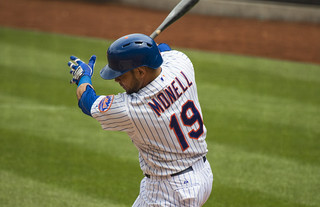 Ten percent of the Mets 40-man roster is made up of catchers: Travis d’Arnaud, Kevin Plawecki, Anthony Recker, and Johnny Monell. Of course, that’s only the case because the d’Arnaud was placed on the disabled list early in the year, forcing the Mets to add Plawecki and later turning to Monell as his backup.

The Mets are likely going to have to cut one of Recker or Monell from the 40-man roster, whether it’s for Wright or Goeddel. The Mets 40-man roster real estate is at a real premium right now, and it’s only going to get more complicated when they are forced to activate guys like Zack Wheeler and Josh Edgin after the World Series. They’ll also need to make room for guys like Brandon Nimmo this fall, who will need to be added to the 40-man roster to avoid exposure in the Rule 5 draft in December.

Unfortunately, one of Recker and Monell may be an immediate roster casualty due to both the current and future roster crunch. For now, it’s logical to conclude Monell will be the first to be dropped, since Recker is here now and has more big league experience under his belt.

Nieuwenhuis has been great since being brought back to the organization in early July. But right now, there is just no place for him on the roster, so it seems inevitable they designate him for assignment, hopes he clears waivers and accepts the outright assignment with Las Vegas.

Given he’s been designated for assignment more than once in a season, he has the right to declare free agency. But his best bet to get back to the big leagues and into a pennant race might be with the Mets, so it’s an option he might be wise to take.

Besides, if he joins another team after August 31, he is ineligible for the playoffs, anyway.

What about Danny Muno and Wilfredo Tovar? 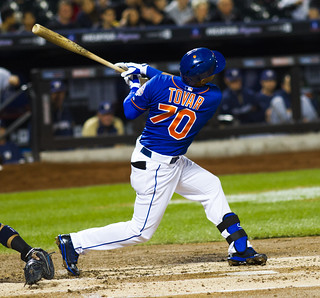 It seems unlikely the Mets will recall either of these two infielders when rosters expand, as if they’re not viewed as people who can help win in September, there is really no place for them on the active roster.

So, it’s conceivable the Mets may consider cutting one of these guys off the roster to make room for Wright or Goeddel as well.

Tovar is an above average defensive player, but his bat does not project very well in the big leagues. In the cups of coffee he’s gotten at this level in the past, he hasn’t shown much, either.

As for Muno, he’s always hit in the minor leagues, and he’s a versatile infielder capable of playing third base, shortstop and second base. He’s a switch hitter, has a good eye at the plate and has shown some good pop in the minor leagues as well. But he didn’t hit very much in any of his stints in the big leagues this season, so it’s not clear where he might fit going forward.

It would come as no surprise if the Mets tried to clear either of these two players through waivers to make room on the roster.

How does Eric Campbell fit on the roster? 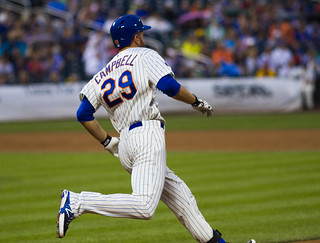 The Mets have liked Campbell’s short stroke and ability to hit line drives over the last year and a half. Unfortunately, it didn’t translate into much success this season at the plate, although he has come up with several big hits over the last month for the club.

In addition, he’s not a very good defensive player regardless of where he is on the diamond. With the current construction of the roster, there are other players who are simply higher on the depth chart right now.

Does that mean his 40-man roster spot is in jeopardy? Not necessarily, at least not in the immediate term. But he may not necessarily earn a call-up when rosters expand either, which begs a legitimate question as to where his value is on the 40-man roster with Wright’s activation forthcoming.

Killing two birds with one stone. 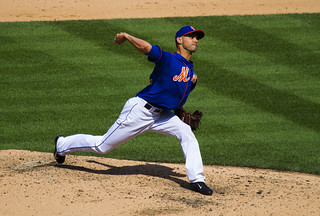 The Mets can clear both a 40-man roster spot and an active roster spot by designating Carlos Torres for assignment.

It has not been a very good season for Torres, as it’s possible the heavy workload from previous seasons have caught up to him. In fairness, he is used far too often in late-game scenarios, and that’s just not a role he’s suited for. Instead, he should be a long reliever, but while Torres has faltered in his mis-casted role, Sean Gilmartin has embraced his long-relief role, which kind of makes Torres extraneous.

He allowed two runs in their mess of a game on Sunday against the Pirates, and the game-winning home run to Henry Urrutia on Wednesday night in Baltimore. He had been un-scored upon in his previous seven outings before Sunday, and he doesn’t walk a lot of batters, but he’s been extraordinarily hittable in 2015 with a below average park-adjusted ERA this season.

There’s no question he’s among the weak links in the bullpen. The question is, would the Mets be willing to part ways with Torres in the immediate term, knowing he could get claimed off waivers?

The case of Jack Leathersich.

Leathersich is on the 40-man roster, and recently underwent Tommy John Surgery on his left elbow, which could sideline him for the entire 2016 season.

But since that injury took place in the minor leagues, he is on the Las Vegas 51s disabled list, not the big league disabled list.

The Mets could really use his 40-man roster spot at the moment, but there is no easy way to solve that problem.

If the Mets promoted Leathersich and placed him on the 60-day disabled list, that would open the roster spot. But, he would be earning a big league salary plus accruing big league service time if the Mets took that route.

In addition, when the World Series ends, Leathersich has to be reinstated to the active roster, meaning someone else has to give up his roster spot, not to mention the other players who are also on the 60-day disabled list (Wheeler, Edgin). Then, at the conclusion of spring training next year, the Mets would have to place Leathersich back on the 60-day disabled list, and he would continue to earn a big league salary and accrue service time.

In other words, this is not ideal.

The Mets could attempt to outright Leathersich off the 40-man roster and into the minors, but he would have to pass through waivers first in order for that to happen.

It could be a safe bet. It’s hard to envision another team carrying a player they know will not contribute next year on their 40-man roster, especially since most teams face the same challenges the Mets do, albeit to a likely smaller degree.

But the Mets successfully navigated a similar problem with Jeff Walters last year, so they could attempt to do this again with Leathersich.

If the Mets are interested, it’s highly likely any of Monell, Campbell, Muno or Tovar would clear waivers, be it now or in 2-3 months. They are not terribly unique organizational-type players right now, meaning there’s not a lot of incentive for another club claim one of these guys and add them to their own rosters, especially since none of them are eligible for postseason play if claimed in September anyway.

After his start Sunday, Verrett goes down. He’d be unavailable for the next few days anyway. Wright gets activated.

When Goedell is ready, Conforto goes down. He gets a week of full playing time in Vegas and Kelly Johnson gets his starts in NY (as you suggested).

Monell & Muno get put on waivers.

Wilfredo Tovar gets a September call up. With expanded rosters, Mets will hit for Tejada more. Tovar will replace him on the field, and also be a defensive replacement for Flores in his starts at short.

Very well researched and presented. One Q: Lagares ? DL at some time soon, or wait til the off season for the big fix? He’s still good, but he’s not the same guy.

With rosters expanding in 11 days I can’t see them DLing him now. And doesn’t sound like 2 weeks off would fix anything. Whatever they do (and it’s not clear what they can do — they mentioned surgery then backtracked from that) is going to have to wait till the offseason.