As the A’s continue to struggle to gain significant ground in the American League West, Ben Zobrist remains a hot commodity on the trade market as the July 31 non-waiver deadline approaches.

Last week, Nick Cafardo of the Boston Globe reported the Giants, Mets, Yankees and Nationals had all expressed interest in acquiring Zobrist ahead of the trade deadline, and Gordon Wittenmyer of the Chicago Sun Times reported earlier in the season the Cubs would also have interest in the 34-year-old soon-to-be free agent.

On Monday, MLB Network’s Peter Gammons confirmed there was interest from the Nationals, Cubs, Mets and Yankees, but also listed the Royals and Pirates among those who are interested, bringing the total to seven teams being reportedly in the mix for the super-utility player.

Regarding the Mets, Sandy Alderson said a few weeks ago at Citi Field he would be willing to overpay in trade under the right circumstances.

That player was Zobrist, as it turns out. 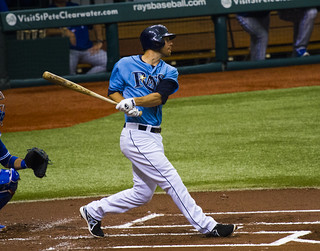 Joel Sherman of the New York Post recently said Sandy Alderson’s interests are high enough in Zobrist the club would consider an above-market value deal for the super-utility player.

But since then, Sandy Alderson said there were some trade discussions taking place a few weeks ago with a team which was considered a, “seller” at the time, but have since become a, “buyer.”

That team could be the A’s.

In his report, Sherman said A’s General Manager Billy Beane pulled Zobrist off the market after a recent hot streak by his club. In addition, Ken Rosenthal of FOX Sports recently reported, the A’s aren’t rushing to move Zobrist for the time being.

But while the A’s have certainly shown improvement over the last month or so, they remain nine games behind the Angels in the American League West and eight games out of the second Wild Card with under two weeks to go until the trade deadline. So, it seems inevitable A’s GM Billy Beane will soon begin heavily shopping some of his assets – such as Zobrist – as the trade deadline nears, if he hasn’t started already.

In any event, the A’s were never likely to rush into a deal for Zobrist anyway. Demand, as expected, is beginning to soar for him as the trade deadline approaches, which could result in a team greatly overpaying to acquire Zobrist.

The Mets need him and apparently are genuinely interested in him. He checks all of their boxes, as he could start at two positions on the infield right now, arguably three. He could also arguably start in two outfield positions. for them as well He is a solid hitter who can hit for power, and has playoff experience which came during his years in Tampa Bay, something which could be very valuable for them in the heat of a pennant race, and games in October should the Mets qualify for the playoffs.

But it’s not clear what Alderson’s definition is of an overpayment for a player like Zobrist, and whether or not he’d be willing to ultimately meet the ultimate asking price to get him.