Update, 6:25 PM: Even with the potential of Tommy John surgery for ace Yu Darvish, the Texas Rangers are not “especially interested” in Mets pitcher Dillon Gee at the moment, Jon Heyman reports on Twitter.

March 7, 11:26 AM: Darvish and the Rangers will seek other opinions on his condition over the next couple of days. 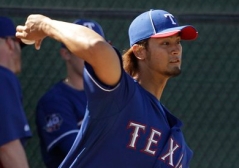 Darvish left his scheduled Cactus League start earlier this week with what was called a strained triceps muscle in his right arm.

I’d hate to see a star pitcher go down with a season-ending injury. He missed some time last year with an elbow problem, and so it’s fair to wonder if this is linked to that issue. These injuries have become an epidemic in baseball, but they’ve taken some initiatives to try and prevent these types of problems at the amateur ranks. Hopefully these problems begin to dwindle.

Earlier this week, Sandy Alderson told reporters in Port St. Lucie he was not actively engaged in trade talks for one of his starting pitchers. He said if a trade were to be made, it wouldn’t be until the end of spring training or if a club had an injury to one of their starting pitchers. Well, the Rangers likely need another starting pitcher now, and this is exactly the kind of scenario Sandy said could spawn trade discussions. The Mets and Rangers have been linked in various rumors during the off-season – most notably surrounding Dillon Gee – so this is worth watching closely now.

Meanwhile, the Rangers, Red Sox, Padres and two other clubs have been in pursuit of Phillies LHP Cole Hamels, according to Michael Silverman of the Boston Herald.

One response to “Yu Darvish could need Tommy John Surgery, Rangers not interested in Dillon Gee”