Ben Zobrist wants, and is likely to sign a four-year contract this winter – Mets no. 1 target 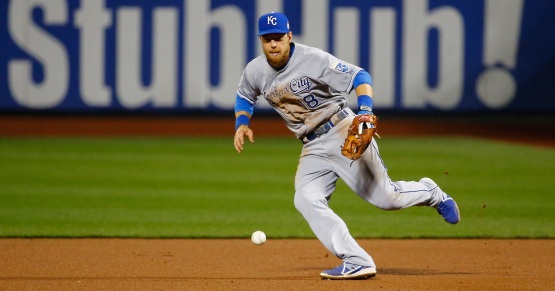 The Mets continue to target Ben Zobrist in free agency as they search for ways to increase their versatility, improve their contact rate and overall defense in both the outfield and on the middle infield.

Zobrist can play both middle infield positions and the corner outfield positions proficiently. He can also play first and third base and centerfield if needed. He checks a lot of the boxes the Mets are seeking this winter.

The Mets held a conference call with Zobrist in mid-November, which is a subsequent meeting to the one they had with his agents at the GM Meetings in Florida in early November.

Zobrist is a contact-oriented hitter, and showed during the World Series against the Mets he is one of the better fastball hitters in the game, even as he concluded his age-34 season.

But the Mets are not alone in their pursuit for the versatile super-utility player. There are at least ten teams who are reportedly interested in signing Zobrist, and the 34-year-old is looking for a four-year deal.

And due to such demand, Nick Cafardo of the Boston Globe says Zobrist is likely to secure a four-year deal this winter, and Ken Rosenthal of FOX Sports says a team guaranteeing the fourth year could be the deciding factor for him.

Rosenthal says Zobrist is the Mets number-one target this winter, but at least ten teams – including the Cardinals, Royals, Giants Mets, Braves and Nationals – have reportedly expressed interest in signing Zobrist.

The Mets and Nationals are expected to be the high bidders for Zobrist, according to Tom Verducci of MLB Network, but Adam Rubin of ESPN New York says the Mets are unlikely to sign Zobrist to a four-year deal.

All things being equal, Zobrist would be an upgrade to Daniel Murphy and provide stability up the middle. He would help transform the top of their lineup from swing-and-miss to more contact with an ability to get on-base, and be another solid, veteran leader for the clubhouse as they endeavor to win their first World Championship since 1986.

But he’s entering his age-35 season, and a guaranteed four-year deal is a risky proposition for any player. The back-end of such a contract could become an albatross as his bat speed slows and his foot speed diminishes behind the pitching staff.

However, if the Mets intend to win right now, it may be a risk the Mets have to take with Zobrist, and deal with the consequences of the long side of such a contract.

Zobrist is not tied to draft compensation, as he was ineligible to receive a qualifying offer after being dealt to the Royals by the A’s mid-year.

One response to “Ben Zobrist wants, and is likely to sign a four-year contract this winter – Mets no. 1 target”