In relatively short order, the Mets could be realizing their long awaited dream of having Matt Harvey, Jacob deGrom, Noah Syndergaard, Steven Matz, and Zack Wheeler pitching in their starting rotation with no limits.

Assuming nobody else gets hurt – and that of course can never be ruled out with pitchers – that day could come sometime in June or July when Wheeler completes his rehab from Tommy John Surgery.

It’s also possible that day might never come, and that has nothing to do with anyone getting injured.

Since the trade deadline in 2015, it’s been abundantly clear the Mets are more than willing to move Wheeler under the right circumstances. And at the deadline, the club felt the circumstance was right to move Wheeler in a package that included Wilmer Flores to the Brewers in exchange for former Met Carlos Gomez.

But that deal fell through, perhaps fortuitously for Wheeler, Flores and the Mets, as they were able to acquire Yoenis Cespedes instead without dealing any big league talent.

But assistant GM John Ricco said last week at the GM Meetings the club is still not including Wheeler in it’s list of untouchable players for a trade this winter.

Why all of a sudden are they willing to move a player who was a part of their long-term blueprint? Because he’ could be viewed equivalently to a prospect again in their organization.

“It’s a little bit different, only because he’s injured,” Ricco explained. “He’s different because he’s not going to be there for the first couple of months. So he’s different from our perspective. He’s different from another team’s perspective. But before the injury, he was viewed just as highly, or maybe even as a more highly regarded prospect and pitcher than the other guys. So we still view him that way. We think coming off the surgery he’s going to be pain-free and might be better than the guy we saw when he came up.” 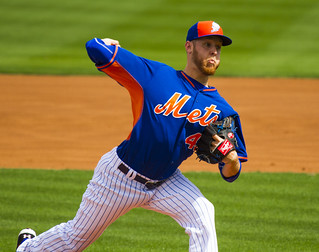 By the time Wheeler returns, it will be mid-2016. But the time Wheeler is truly 100 percent, it will be 2017. That’s nearly two full years until the Mets can hopefully fully benefit from Wheeler’s talent again. He went from being a short-term solution before the 2015 season to the equivalent of a prospect in Single-A thanks to having Tommy John Surgery in March. That’s not his fault at all. Things happen, and injuries like this are major setbacks.

Of course he isn’t a prospect by definition, but he potentially becomes expendable because of his timeline thanks to the quick rises of Noah Syndergaard and Steven Matz, plus their control of Jon Niese over the same span.

And, he will be costlier at that time as well.

At that point,  he will be knee deep in his arbitration years, as is the case with Syndergaard, Jacob deGrom, and Matt Harvey. All of those salaries will be rising through arbitration.

Are they right in their view? It’s certainly a 3D view and a creative one at that. But there’s no way to know if they’re right until they see what he is 2-3 years from now, if he gets traded.

So while it’s a gamble from a long-term pitching perspective to deal Wheeler, the Mets could be making a good gamble and a safe gamble if they ultimately move him for the right player back.

Of course, this doesn’t mean the Mets are trying to move Wheeler.

“We’re not actively shopping Zack by any stretch,” Ricco told Marc Carig of Newsday. “But as with the other starters, if something came up that we thought made us better, we’re going to talk about it.”

Ultimately, the Mets wouldn’t be selling particularly high on Wheeler right now anyway. His injury is more complex than that of a traditional Tommy John patient as he also had a tendon repaired in that elbow at the same time. It’s the main reason his return is being pushed out, and as is the case with any pitcher returning from this condition and long layoff, it could a while after before he really rounds back into form.

But it may be at that point the Mets decide he’s too valuable to move, especially as the Mets may have to make other difficult decisions with their other pitchers 2-3 years down the line.

Still, this is all a very good and rare problem for a team to have.

If we are saying that Wheeler probably won’t be 100% until 2017, then other teams are saying that, as well. And we will be trading him at a low point, getting less back in return. The Gomez and Bruce deals are examples of that, I believe.

If one of the pitchers were to be traded, I will go with trading Harvey as he may bring back a bat or two that is under control for several years.

Zack should be written off for next year, so trading him will bring lower return at this point. They may have to go with what they have (which is pretty good) next year and concentrate on filling the relief needs. When decision on trade comes, Harvey may move to the top of the list because of Boras who will probably look for 10 years at at least $30 million, which may be too rich for the Met’s bank account unless the team gets sold, which isn’t a bad idea.