Terry Collins has no regrets about his bullpen usage on Saturday 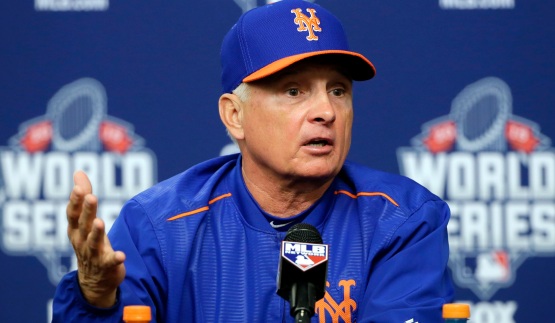 Terry Collins is well aware that he and the Mets could very well be in the drivers seat in the World Series, and sitting up 3-1 if they had been able to execute better defensively, specifically in two plays in Game 1 and Game 4 against the Royals.

But instead, the Mets have their backs to the wall in Game 5, as they’re the club facing elimination and needing to win three games in a row, two of which at Kauffman Stadium if they can pull off a win on Sunday night.

But as he’s done all year, Collins is not harping on the past and what could have been.

Rather, he is focused on trying to pull his team back into this series with a win on Sunday.

“I don’t live in yesterday. I live in today,” Collins explained. “I don’t know what tomorrow is going to bring, I only worry about today. Last night is over. We’ve got to get ready for tonight. The biggest game of the year is tonight. We have arguably maybe our best pitcher going tonight. We’ve got to go win. And we can’t look back and say, ‘What if?’ Well, we could do that all season long. We’re not. We’re here. So we’ve just got to move forward.” 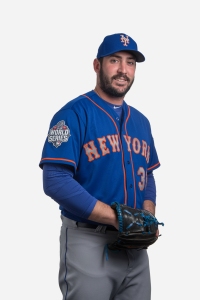 And Collins will attempt to move forward with Matt Harvey on the mound as they attempt to get this series back to Kansas City.

But that didn’t stop him from taking more questions about the events which unfolded in the eighth inning of Saturday’s devastating loss to the Royals.

Once again, Collins was asked if he had regretted not using Jeurys Familia for a six-out save, which might have created a different outcome for the Mets.

But Collins has no regrets for using the formula which had helped the lead the club to a 74-6 record when leading after seven innings in 2015.

“It’s easy to sit back and say, ‘You should have done this after it didn’t work,'” Collins explained. “Let me tell you something … when we got Tyler Clippard and Addison Reed, we went 7, 8, 9. We won a lot of games using that scenario, and last night it didn’t work. So, you know, after it didn’t work, it’s easy, ‘Well, you should have used Familia.’ Well, I used Familia in Los Angeles and I got crucified because I used him for a six-out save. And last night I got crucified because I didn’t use him for six outs.

“That’s the nature of the game. I’m not offended by that,” Collins continued. “That’s opinions. But we went with what worked for us, and it didn’t work last night.”

Collins chose to lament over the plays his team did not make on Saturday night, as opposed to the pitching decisions he made.

“Had we made a couple of plays, the game is over, we win the game,” he explained. “Just like we did in Game 1. Jeurys Familia gave up a home run; he hadn’t given up a home run from all year. Should I have not used him against Gordon? Should I have brought somebody in? No. You just go with what’s been working for you. It’s the same thing with the lineup. I’m going with the guys that brought me to the dance. And those guys last night were the ones that got us to this point.”

Collins is right. Yes, managing in the World Series requires more urgency, and maybe a shorter leash in some cases. Certainly, a case could be made Collins could have yanked Clippard earlier than he did, and perhaps if anything, that’s the one he’d like to have back.

But he can’t be faulted for using the pitchers that got him here. Indeed, they needed to be lockdown and they weren’t, but the same scenario could be in play on Sunday, and it could all work out just fine for the Mets, like it has so many times in 2015.

It’s hard to make 180-degree changes from a system which has helped them reach the middle of a World Series. As he said, it just didn’t work out on Saturday, but that was largely due to the defense behind the pitchers he decided to use in the eighth inning.

And the last thing Collins needs to do is shoot aimlessly out of desperation. It’s not what a strong leader does, and it does not instill confidence in a team when a manager rides blind faith and makes wholesale changes to a functional system.

Despite the Mets having their backs to the wall and so many things going wrong for his club in the World Series, Collins continues to brush off the pressure of the postseason, and says his clubhouse is still very upbeat despite some very heavy blows to their chests in this series.

“I understand that there’s supposed to be a lot of pressure in the World Series,” Collins said. “Let me tell you something, the pressure is over 162 and getting to this point. This should be fun, and enjoy it. We’re frustrated with what’s happened, but we’re not down about it. Our clubhouse is very positive. I walked through there a little bit ago, and guys were smiling, playing their games. Their heads aren’t down, because it’s an honor to be here, and we’re going to approach it that way. We’ll figure out tonight as the game rolls on what our best options are and we’ll go with it.”

Clippard is a regret

Isn’t the problem that Terry used Familia with a 6 run lead the night before? That was an unnecessary burning of resources and created the problem they faced on Saturday.

I am sorry, but I think Terry is over rated. I have said it all season long. He has a plan and he goes with it, and stays with it whether or not. Too scripted and not thinking of the moment. Tonight is the time he may be forced to take a chance here and there, and hopefully it will pay off and finally learn something before its too late!
Better yet, how about a complete game by Harvey.

Almost got my wish and Terry was forced to take a chance even after having to give in to Harvey but it didn’t work. Maybe it was better to lose after the Harvey decision than get into a place where they loose again like they did in the 12th inning