Matt Harvey has unquestionably made a successful return from October, 2013 Tommy John Surgery, going 12-7 with a 2.60 ERA in 166 1/3 innings in 2015, helping to lead the Mets towards their first postseason berth in nine years.

But there’s been an on-going discussion about what Harvey’s innings limits might be in his first year back after surgery. It was always believed to be no more than 30 starts and about 190 innings.

So the Mets have attempted t manage those, “soft” goals by using a six-man rotation and skipping Harvey in the rotation at least once down the stretch of the season.

But according to Jon Heyman of CBS Sports/MLB Network, Harvey’s agent, Scott Boras, contacted Mets GM Sandy Alderson at the end of August essentially mandating Harvey be shutdown for the season at the 180 inning mark. 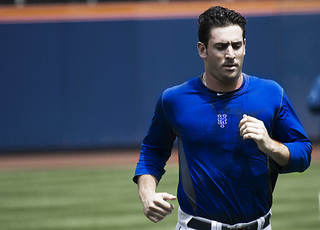 “For a guy to say to us on the 29th of August ‘180 innings and then you’re going to shut him down …’ don’t call me seven months later and tell me you’re pulling the rug out from under me, not after all we’ve done to protect the player,” Alderson told Heyman.

Boras insists the mandate isn’t coming from him directly, rather through his own research and from the opinions of physicians experienced with performing the procedure on professional athletes.

“These are doctors’ opinions,” Boras said to Heyman. “And club officials are not determining how many innings he can pitch. Matt Harvey would love to pitch. But the surgeon who saved his career and other surgeons consulted have said that for maximum safety he is not to exceed 180 innings for the year.”

Heyman says Harvey was informed by Alderson the Mets might exceed their original limit but only by a small number, after which this debate ensued.

“We had a soft target, and we really don’t expect to go much above it,” Alderson told Heyman.

If the Mets do in fact shut Harvey down at 180 innings, he essentially has no more than two starts remaining this season, and would be eliminated completely from any consideration from pitching in the postseason.

Terry Collins said earlier this week Harvey insisted any plan in place ensured he would be able to pitch throughout the postseason, and to this point, both Alderson and Collins have insisted all of their pitchers – including Harvey – would be available for the final week of the season as well as the playoffs. 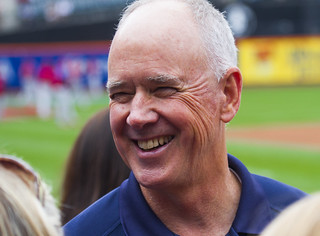 But Boras warns if the Mets exceed the 180 inning mark for Harvey, they could be putting his career in jeopardy.

“This is not a club’s decision. This is a doctor’s decision,” Boras said. “Any club that chooses to defy a surgeon’s wishes is putting the player in peril.

“This is not a negotiation,” Boras insisted.

Indeed, there are risks involved with exceeding the limits set by the recovery program. But Harvey did not pitch for 17 months following his procedure, and Alderson says that’s one of the reasons why the Mets have been somewhat more liberal with Harvey, although it’s clear they’ve remained both sensitive and cautious towards the issue.

Meanwhile, the Mets are proceeding with their plan regardless of what Harvey’s agent says or wants, which is designed to get him about four more starts and through the end of the regular season, according to Adam Rubin of ESPN New York.

“Sandy is not going to be dictated by anyone,” a club source told Mike Puma of the New York Post.

That plan, according to assistant GM John Ricco in Miami on Friday, is for Harvey to pitch no more than 195 regular season innings and for him to have a reasonable workload in the postseason.

To meet those requirements, Ricco said Harvey will make four more starts in the regular season as part of a six-man rotation, and get skipped one more time as well.

Ricco said the plan for Harvey has been in accordance with team doctors throughout the season.

According to Puma, Harvey is slated to start game one of the Division Series should they qualify for the playoffs.

Ultimately, it remains to be seen how the Mets proceed with Harvey. Plans change, situations change as well. But recall when the Nationals shutdown Stephen Strasburg, and his lack of availability unquestionably hindered their chances in the 2012 National League Division Series.

Do the Mets take that same risk? Do they adhere to the wishes of his agent and undermine the core of their success in 2015? Or do they proceed as planned and aim for short-term success, knowing Harvey could be at risk in the future?

The Mets have insisted they will put their best foot forward in October. Time will tell.

I want Scott Bora shut down: he has exceeded his undue influence limit.

You gotta wonder why the Mets left Harvey in some games too long and why they didn’t skip some of his starts earlier in the season…..

Adam Wainwright was an inning and a third away from 200 his first year back from TJ, and he threw 15 innings in the postseason that year… and proceeded to finish top 3 in CYA voting the next two years.

“Recall when the Nationals shutdown Stephen Strasburg, and his lack of availability unquestionably hindered their chances in the 2012 National League Division Series.”

Really? How do you figure? Strasburg was terrible in two of his final three starts in 2012, struggling so much that the Nats actually shut him down one start earlier than they had anticipated. His replacement threw six innings in his start and allowed just one run in a playoff game won by the Nationals 2-1.

Not only is it questionable to say that the shutdown hindered the Nats in the playoffs, I think you could very easily make the case that it helped them.

This reeks of Boras covering his own butt. If Harvey does well beyond 180 innings then its a payoff and more influence over Harvey at contract time because he is the caring agent and if Harvey breaks down later on, then he can say I told you so. Win win for him as a manipulative person aka agent. But just bad business to attempt to alter the plan a month from the end of the season when the playoff chase is on.

The mets are still a year away from being World Series contenders. Why risk Harvey’s 2016 season just to hopefully win the NLDS?